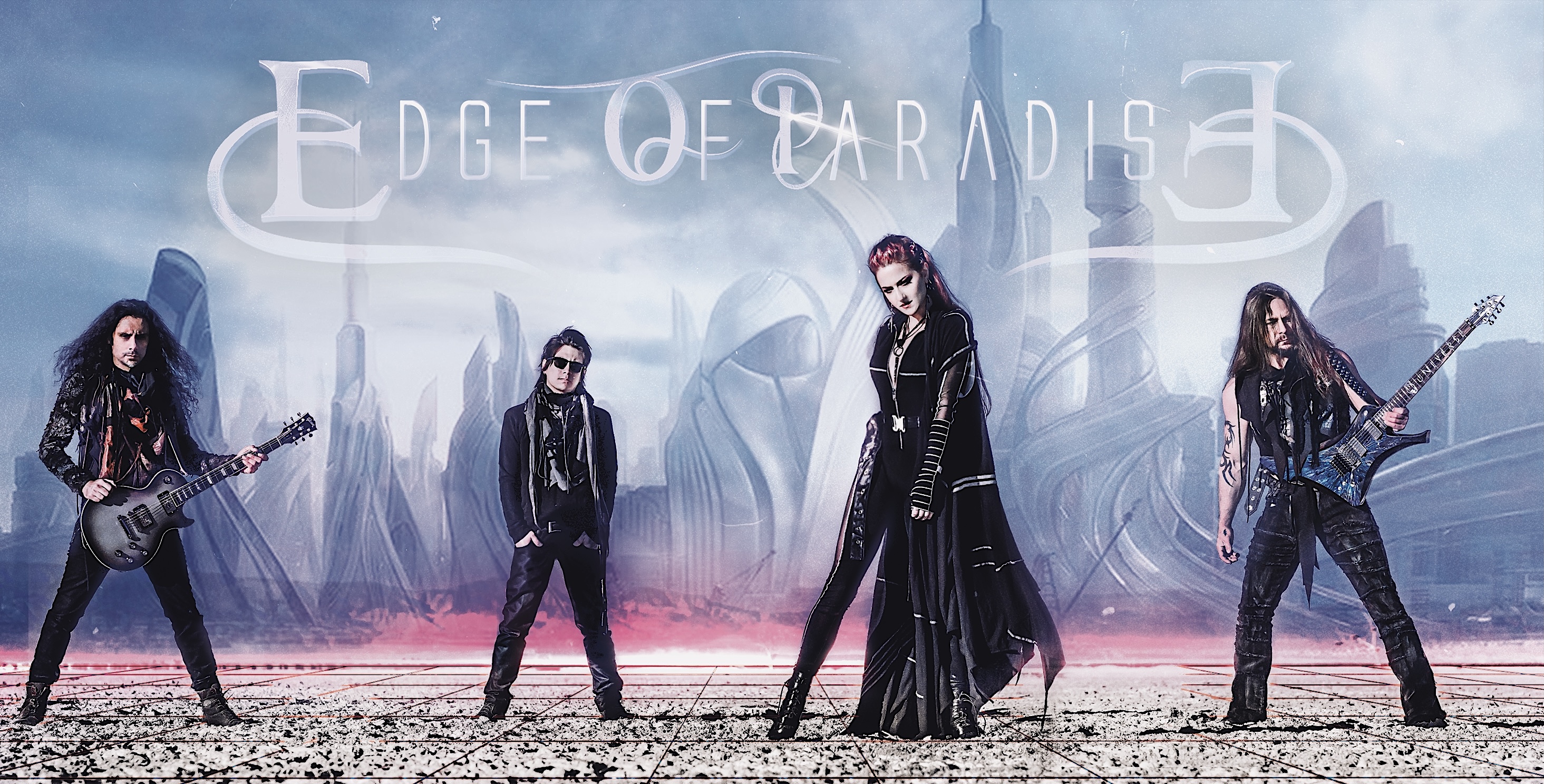 Edge of Paradise founding members, vocalist/pianist Margarita Monet and guitarist Dave Bates, have found their perfect crew, with drummer Jamie Moreno, rhythm guitarist David Ruiz and bassist Justin Blair. With US, Europe and Japan tours under their belts, the band, tighter than ever, is ready to transport fans to a new dimension of massive sound and visually stunning, futuristic show!

"Music from another world" That's how Edge Of Paradise sound is usually described.

“Top notch Metal at its finest!” A crossover between electronic, power, industrial and infectious melodies to the core!

“The Unknown” is Edge Of Paradise's latest and defining album, coming on the heels of their greatly-received 3rd album “Universe”.  Produced by Howard Benson (Halestorm, Seether...) who, together with Mike Plotnikoff, Neil Sanderson (Three Days Grace) and mixer Jacob Hansen (Amaranthe, Volbeat) helped the band bring their biggest sounding album to life.

Want to be a part of the world? Edge Of Paradise is one of the most engaging bands out there, welcoming and interacting with fans from all over the world! With a multi dimensional approach, from one of a kind artworks created by Margarita,  to exclusive items, featured in their cutting edge videos, apparel, vinyl and numerous autographed items, fans everywhere can own a piece of the band’s world, and continue to grow their collection!  So follow them on social media, get to know the members after their shows and enjoy the music of Edge Of Paradise!

Edge Of Paradise was formed by Margarita Monet and Dave Bates in 2011. Few months after formation, the band released their debut album 'Mask' that featured rhythm section of bassist Tony Franklin (Blue Murder, The Firm) and drummer Gregg Bissonette (David Lee Roth Band). 'Mask' came at #6 most added on national CMJ  radio, right behind Machine Head and solidified existence of Edge Of Paradise. An album chockfull of industrial-tinged metal coupled with soaring vocal hooks, was greatly received by critics and fans worldwide.    Legendary Rock Interviews stated "Once in a while a new band comes along that not only has a unique sound of its’ own but draws upon all the things we love about metal or rock to begin with. Edge of Paradise are one of the best independent bands to come out of L.A. in some time."    After the release of 'Mask', touring numerous states on the West Coast and landing a gig in HI, the group immediately began writing to showcase the bands maturity and define the direction that was pre-empted by “Mask”.     By 2013, the band started working with legendary Michael Wagener on the mix of the new songs and recording with grammy winning producer Bob Kulick (Kiss, Motorhead), 'Perfect Shade Of Black' was the result. The EP was made available only via physical release, before the worldwide full-length album release in 2015. The EP received rave reviews, painting a vivid picture of the bands staggering growth, and if public perception is any indicator, the lyric video for one of the songs "Breakaway" quickly reached 200,000 views with the debut on AOL's "Noisecreep."   RushOnRock.com said; "Monet really lets rip on title track Perfect Shade Of Black – opening up her powerful pipes to reveal a vocal range her peers on the female-fronted metal scene can only dream of... it’s obvious why this band’s big news on the retro-obsessed LA scene right now."          2014 served as a heavy touring year for the band, Edge Of Paradise toured West Coast and East Coast, as well as hitting some states in midwest. And after playing in over 18 states and signing with German based label, Pure Steel Records the band released their second full length studio album. IMMORTAL WALTZ, produced and recorded by the legendary Michael Wagener was released May 2015. Right away the album has started to receive great review from critiques from online and print magazines. Revolver magazine took note of the band and released their music videos for single "In A Dream" and "Rise For The Fallen". The album was voted album of the week by Revolver's readers.

The band, tighter than ever, is ready to blow everyone away once they are back on the road with this stunning new music in tow. Current plans are for the band to tour extensively through 2022 in support of "The Unknown" as well, with touring announcements coming up soon. Want to be a part of the world? The band is one of the most engaging bands out there, welcoming and interacting with fans from all over the world! So follow them on social media, get to know them after their shows and enjoy the music of Edge Of Paradise!